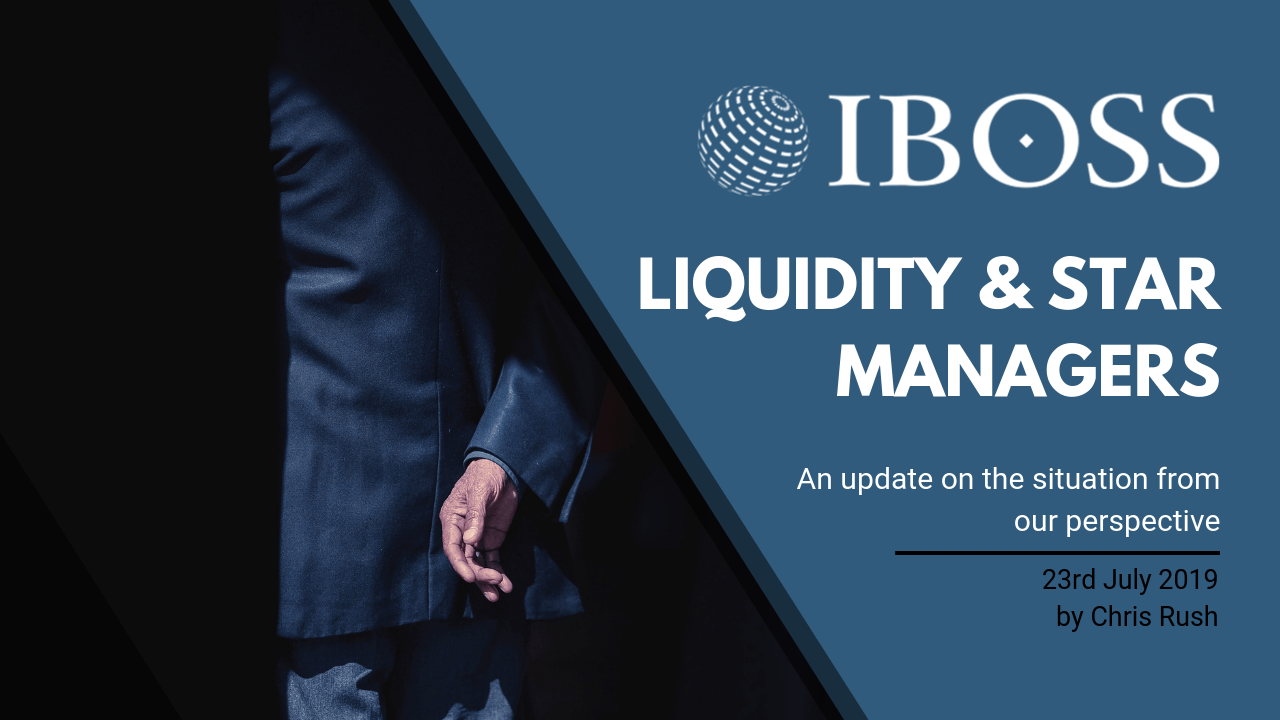 As many of you know, we do not have an allocation to the Woodford funds in any format, having removed the manager from our portfolios in 2011, but we are aware many advisers have clients which have invested directly into the Woodford funds. The situation remains unclear as to when renewed access might be granted to the fund, but now that the dust has started to settle, we thought it would be worthwhile to provide an update on the situation from our perspective.

An adviser recently asked us whether other UK funds held in our portfolios could potentially have similar issues to Woodford?

This is a good question, and one we’ve been looking at closely both in respect to the funds we hold and those which remain on our radar. The list of funds which are on our radar includes funds we might be considering for future inclusion, plus some higher profile ones.

Following the closure of the Woodford fund, we contacted each of the UK funds we hold and requested reports on; Liquidity, Market Cap Breakdown and Fund Size/Investor Base.

A liquidity report gives us an indication of how easily a fund can liquidate its assets to allow for redemptions. The report helps us determine what percentage of a fund is in ‘liquid??? assets.

Results: The liquidity reports demonstrated that our combination of UK funds can liquidate (on average) over a third of their total assets in 1-2 days and circa 80% of their assets in 20 days based on 20%-30% trading volumes. The unknown question for context of course is how big a widespread liquidity event would be and unfortunately this will remain unknown until such an event happens. In simple terms, there could be a single fund liquidity issue such as the Woodford one, or something on a larger scale which could potentially embroil multiple funds with similar investment profiles. Whether it’s a liquidity issue or just something else like market or sector reorientation, our multiple funds in a sector approach can potentially help dissipate some risks from most foreseeable scenarios.

We use this information alongside the liquidity report to assess our portfolios’ total assets in smaller cap stocks. It is, in our opinion, worth looking at the cap breakdown separately, as many of these smaller stocks can trade frequently and without problem until an issue arises. At this point they can be much harder to sell than expected and suddenly the price on the screen is not the price you can realise. A pertinent point to consider here is that it is not just about your ability to sell an asset but also the price you are able to receive for that asset.

Results: As expected, those funds with a smaller cap bias are rated as less liquid. To put that in the context of our UK funds, those with a small cap bias make up 6% of the overall portfolio and 35% of our total UK holdings (using PMS 4 as an example). The question then necessarily arises, why hold small cap biased funds at all? The answer is performance, and between July 2009 and July 2019 the FTSE 100 has produced a total return of 150%, whereas the FTSE 250 has returned 240%.

We have highlighted potential fund size issues for many years, and it is worth considering that funds which rapidly gain assets can lose them at the same speed or even quicker. Smaller funds may find it easier to offload assets should they face redemptions. It also seems fair to say that smaller funds are more protected from the potential of negative media glare. This might be an advantage, even if it is largely unquantifiable. The fact that Neil Woodford is probably the most high-profile manager in the UK certainly did not help the redemption situation once things started to go wrong. For the UK funds currently being used by IBOSS we looked at the existing investor base. What we want to avoid is owning a fund where much of the fund is held by a few very large investors. We witnessed the dangers of this first-hand when HL distanced themselves and SJP took their segregated mandate from Woodford.

Results: Looking at fund size, we continue to avoid the largest funds in the sector, many of which are run by so called ‘star’ managers. The definition of what makes a star manager is open to interpretation. One rough guide might be somebody a retail client is more familiar with. Often this is coupled with somebody the media would feel is of enough interest to a significant percentage of their readership and/or who will increase click through rates. The concern here is that if a star manager’s under performance makes the mainstream media then the manager could see additional complications from unwanted interest and, potentially, panic selling.

There are many star managers out there managing huge amounts of money, some under performing and some outperforming but it is worth considering the potential impact to these funds should sentiment shift against them, as it did Woodford. Managers with a high profile can do a lot to influence flows into, and out of, their funds and this is, in our opinion, an additional risk and it is a risk which is hard to quantify. As you would probably expect, we hold very few of these star managers. We have been able to find no evidence outside of the initial momentum caused by heavy buying that larger funds have any advantages over smaller ones, in fact quite the opposite. There are some other managers out there, in both the UK and global equity space, whose funds have been hoovering up assets for many years, often holding a fairly limited number of stocks. The ‘pro’ argument is these are high conviction managers holding great companies and the funds are therefore super liquid and always an attractive investment. The ‘con’ argument is valuation, and the price you pay for an asset does really matter. It’s worth considering that past performance carried by high momentum could be camouflaging some of the risks.

Perhaps the biggest take away for us though is that performance matters. To us, Woodford is a warning sign that investors are becoming savvier and less accepting of under performing managers based on their longer-term reputation. After all, the issues arose after a sustained period of under performance.

As ever, we review and assess funds regularly, ensuring that our portfolios are populated with the best managers – but not necessarily the most well-known or popular ones. It’s also a necessary outcome of our multiple funds in a sector way of investing that not all the managers should be performing well at any one time. Our portfolios are set up with a maximum weighting of 4% in any one fund to help minimise manager and fund risks. Holding multiple funds in the sector should also mean even if we are holding a fund which has performed poorly, we should be holding other funds that perform well in that same market condition.