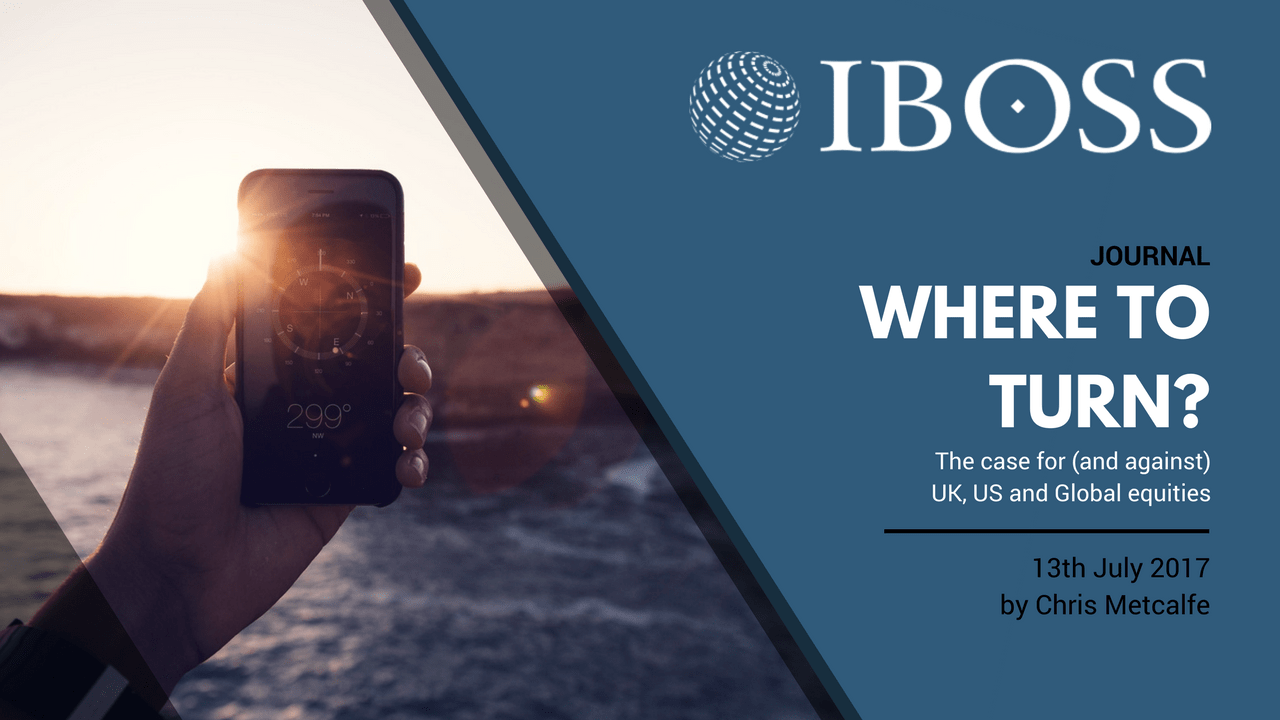 For the purposes of this blog we have concentrated on our positioning in our OEIC 4 which is benchmarked against the IA Mixed investment 40-85% Share sector (Balanced Managed in old money).

Equity markets are high on most historical basis calculations. Price to earnings (P/E) whether cyclical adjusted or not, look somewhere between fully valued and overvalued. There are of course a group of stocks, which for a variety of reasons, it seems nobody is sure how to value. In particular, the famous FANG stocks of the Facebook, Apple, Netflix and Google genre. But there are many more, in what could loosely be termed the Tech space, (apparently, every company is now a tech company, so we need to be careful with the labels) which have similarly eye-watering multiples or even higher. Many of these second division wannabes seem to have prices being driven by fumes and momentum. We would suggest these are not the foundations which a longer-term investor should be looking for. To quote one example, Snap Inc. (formerly Snapchat). The Company’s flagship product, Snapchat, is a camera application that helps people to communicate through short videos and images known as a Snap; that’s all lovely, but as an investor what you probably care about more is the price is down nearly 50% from March. It could literally go to any price from here depending on your view of such stocks and momentum trades, we haven’t a clue and we believe there are two camps here, the one that knows it hasn’t a clue and the other one that thinks it does, we wish them well.

Last year we didn’t buy into the ‘UK has become uninvestable thesis’, which was propagated by some members of the media, economists and even some fund managers, in fact we made very few changes post Brexit. Over the last twelve months there has been a small reduction to our UK holdings overall and additionally 4% of the 20% UK Equity allocation is run on a ‘long/ short’ basis, which basically means the managers are looking to make money on market falls, as well as gains surely some opportunities in this space?

A second point to note is the makeup of the UK stock market. The FTSE 100, which is the largest 100 companies in the UK, derives over 70% of its income from overseas assets, i.e. it is a UK stock market, but is not very representative of UK plc. In our opinion, if for no other reason than this, there is limited downside to holding FTSE 100 stocks relative to a global index.

What is probably more relevant is the sector risk in play here. The UK index has large oil, mining and bank stock holdings and is light on technology and this is something we do manage by analysing the stocks of the UK funds we hold at stock sector level. This includes taking into account the respective managers’ biases, as all managers have preferences or ‘styles’ of some sort no matter how much they protest, but in our opinion, there is exception with Ian Heslop’s team at Old Mutual Global Investors. I am sure the team at OMGI will be happy to provide further details if anybody requires them.

The funds we are using to a large extent will invest across the cap range i.e. utilising small, medium and larger companies where they see the best risk return profile of stocks. Brexit, and all the other political upheaval in the UK, created opportunities as well as threats, and while undoubtedly some stocks came under pressure for reasons largely outside of their control, we want our genuinely active managers to be taking advantage of these situations, because that’s why we sign up and pay their fees.

A third point, is the biggest driver of equity returns post Brexit, has been currency moves, rather than the asset itself. The magnitude of this factor is unusual and again the fall in sterling has helped UK investors to outperform their global peers whilst holding identical stocks. I think the post Brexit environment has been complicated with peoples own personal opinions on the referendum and its outcome more generally, but markets don’t much care for sentiment, they care about profits and a falling currency was a big boost for many companies though the effects won’t last forever.

We are currently holding circa 45% of the assets in this fund in non UK equities and 16% in UK funds where the manager can only make money where their stock rises. This seems to us to be a reasonable split given the vagaries of currency movements, the political/Brexit uncertainties and the heights of many overseas markets especially the US.

Back across ‘the pond’

As the American market now makes up more than 50% of many global indices and funds, its importance cannot be overstated. It remains at historic highs, dominated by the aforementioned tech stocks and we would also contend the US has a level of political chaos and confusion surrounding it, normally attributed to emerging, or even frontier markets. This is coupled by retail investors who seem happy to keep ploughing their money in to ever wackier ETF passive vehicles, or as one commentator recently pointed out, his waitress was explaining to him how much money she was making just shorting the VIX, ok so it’s very anecdotal but surely a case can be made for another canary in the coalmine here. The absence of volatility is to many as mystifying as the low unemployment, but no wage pressure conundrum or QE equals inflation… except it hasn’t (yet) but nothing is forever and we do believe in mean reversion though the market rigging via QE is testing many such theories to the limits

So what do we prefer then? Well our strong risk adjusted performance figures for the current year have stemmed largely from an overweight position to Asia and emerging markets, a broadly neutral stance on Europe and the UK and being underweight in the US. In addition, we also have some absolute return funds within our global equity allocation to a) dampen down volatility and b) potentially provide positive returns even in falling equity markets and apparently, they will fall one day, or at least that’s what it says in our old text books. Our question to ourselves is will the central banks have actually moved out of the spotlight at all before they sweep majestically back in to play to save us all again with more asset bubble inflating schemes?

The fundamentals as far as we are concerned behind this positioning remain as intact for now as they did at the start of the year, but obviously, we will keep under review daily. As of today, however, all markets look high, but the makeup of some seems to us more defensive, such as the FTSE 100. Trump is still proving wholly ineffective at getting any legislation through, economic or otherwise and we have no real idea what Brexit will look like or even if it will happen. We remain relatively defensively positioned and with biases to developing markets with good growth potentials and often better demographics; oh, and with political backdrops that are looking more stable than the US, of which there seem to be a growing number.