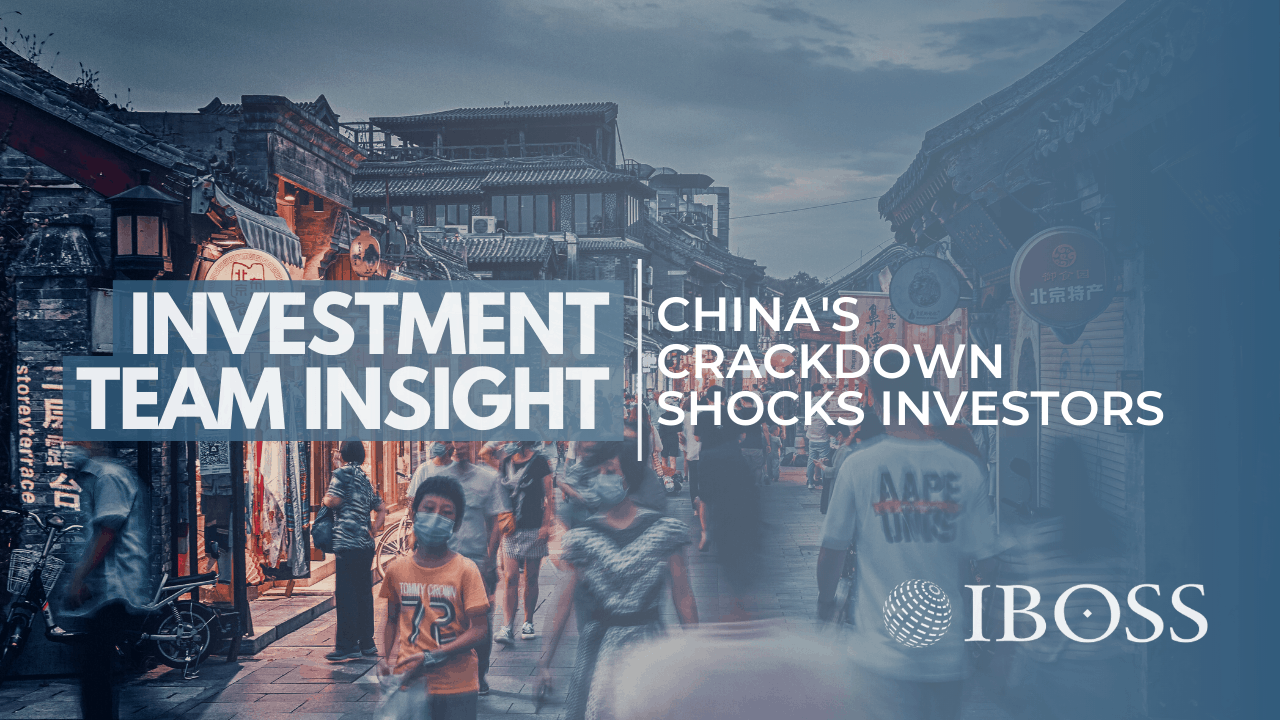 To put the below into context, we need to remember that China is a domestic growth story, and that story remains very much intact; nothing has changed.

That said, 40% of Chinese GDP is linked to the digital economy and is therefore likely to remain engaged with these industries however things evolve. As with many economies, the pandemic has made online digital content even more prominent. However, the Chinese government feels that some companies have demonstrated poor practices when advertising or carrying out their services. Although this point is rarely discussed, they do have a point.

In 2015, China monumentally misjudged the reaction to their devaluing of the Yuan, sending their equity market into a sustained tailspin and the global equity fallout led to the third biggest drawdown of the last decade.

I think much of the poor Chinese communication comes from a combination of arrogance and a lack of experience. Arrogance, because the Chinese communist party, led by its dictatorial leader Xi Jinping, feel entitled to act in anyway they see fit, i.e. if you don’t like it, it’s not their problem. By lack of experience we mean, that unlike the US, the Chinese authorities are not used to rehearsing every word of a speech or running potential legislation or interest rate policy past people who can tell them how the market will react – because they are the market.

What have they actually done?

The Chinese authorities have cracked down on online after-school companies and stopped these educational services from making profits or raising capital. There is a considerable amount of content on this news that is widely available, so we won’t go into too much detail here and concentrate mainly on the implications and outlook.

Whilst words like “uninvestable” are currently being thrown around with abandon, it is worth highlighting that these restrictions only apply to a small segment of digital/online services and does not yet apply to the majority. The reaction to the breaking news on education was a much more widespread sell off based on fear of what comes next.

So, What Does come next?

China has its so-called three big mountains. These are the most significant issues for society and include; unaffordable education, health care and housing. We think it reasonable to expect ongoing legislation and government interference in each for the foreseeable future.

We would caution that despite the almost universally adverse reaction outside of China to the new crackdown, not all new regulations are harmful. For the best active managers with the greatest understanding of the motivations and workings of the Chinese government and its corporations, the newly minted self-inflicted chaos will create many longer-term opportunities.

It is all relative

The difference in relative valuations between the US and China is at an unprecedented level. Fear in the West is that the Chinese authorities will kill off their capitalist model. If they do so (which we don’t think will happen), it certainly won’t be by design. The Chinese continue to want more foreign investment and to keep growing their economy both domestically and internationally.

However, what is true, is that they want Chinese companies to be listed in China/Hong Kong and to draw in capital from abroad. Investors need to be aware of this when investing in Chinese companies listed overseas. As outlined previously, a good active manager should take these additional risks into account and position accordingly.

We are more bullish on Chinese tech than its US peer on a medium to long-term outlook, but very much based on current valuations.

At the time of writing (10:30 | 29/07/2021), the Chinese authorities have already sought to calm market fears, and the Chinese tech sector, particularly, is rallying off its lows. We expect huge volatility in the coming weeks and further clumsy communication, but all that brings new opportunities.

It also has to be noted how the different authorities react to the celebrity names associated with their tech firms. The Chinese authorities put up with Jack Ma’s somewhat confrontational, and rather patronising, way of dealing with them until they finally had had enough. Contrast that with the likes of Elon Musk, whom some would say pretty much acts with impunity. There has to be a chance that some level of government and regulatory intervention might actually be beneficial.

I feel the really big question right now for investors is not really about China but the US; will the US finally manage to pass and implement some meaningful antitrust legislation? The implications, if they do, are impossible to quantify. It might not be many peoples base case, but it has to be a risk of which we should remain cognisant.