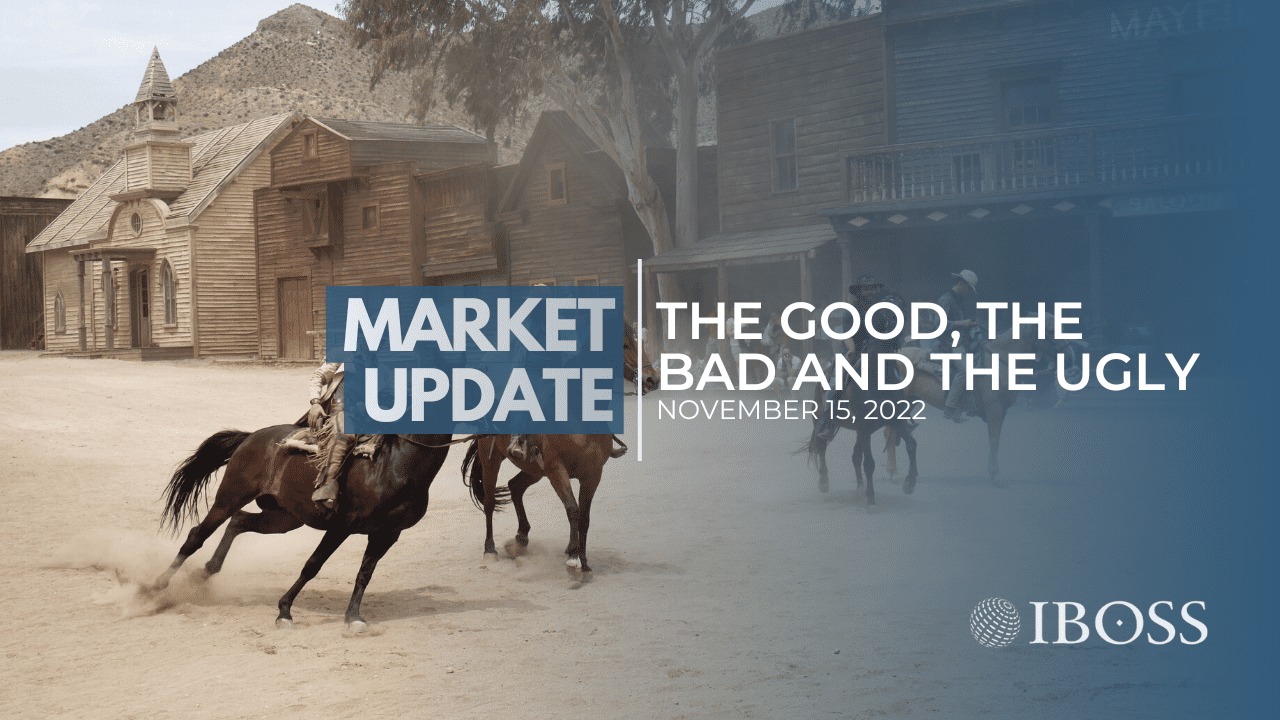 Last week was a volatile one for markets generally, not just crypto. US equities surged as much as 5.5% on Thursday, leaving global equities up 5.1% in local currency terms on the week. Government bonds also had a good week, led by US Treasuries where 10-year yields fell 0.3% to 3.86%.

The big event for markets as expected proved to be the US inflation data, rather than the mid-term elections, although these too delivered a big surprise. US inflation came in lower than expected in October and was behind Thursday’s jump in equities.

Both core and headline prices undershot, leading to the headline inflation rate falling back from 8.2% to 7.7%, the lowest since January, and the core rate slowing to 6.3% from 6.6%. This news means the Fed should be able, as Chair Powell recently suggested, to slow the pace of rate hikes in December from the 0.75% seen of late to 0.5%. Indeed, the market now is forecasting US rates to peak next spring at a bit below 5%, rather than a bit above.

Even though these numbers are encouraging, the data is volatile and too much should not be read into one data point. The market reaction looks overblown and is probably explicable by the pessimistic positioning of institutional investors, if not retail investors who all along have resisted the temptation to sell out. The fact is that core inflation continues to run above 6%, has yet to start slowing conclusively, and remains well above the 2% Fed target. The latest numbers will almost certainly not trigger a major change in the Fed’s stance.

Meanwhile, the US mid-term elections saw the Democrats fare unexpectedly well, with the best performance for a sitting President in twenty years. The red (Republican) wave failed to materialise with the Republicans likely to end up with only a slim majority in the House of Representatives and the Democrats taking control of the Senate.

There was also encouraging news in China where the government introduced 20 measures aimed at improving its Covid control methods. While the recent flare up of covid infections and the approach of winter mean the near-term boost to growth is likely to be limited, it does appear to herald a wider retreat from the zero covid policy next year which will be a big deal.

Action was also announced today to address the other big drag on Chinese growth at the moment, namely the downturn in the property sector. Financial institutions have been told to provide more support to struggling property developers.

In the UK, equities were up 1% on the week, a little less than the gain in global equities which was reduced to 2.1% in sterling terms by a rebound in the pound. Sterling rose as much as 4.4% against the dollar to $1.18 with the move all driven by a fall in the US currency on the back of the revival in risk appetite.

UK large cap underperformed small and mid cap substantially last week. The FTSE 100 was unchanged while the FTSE 250 gained as much as 7.7%. The divergence was down both to the stronger pound, which hits large cap due to their bigger overseas exposure, and also the rebound in risk appetite which allowed small and mid cap to shrug off the depressing domestic economic news.

UK GDP contracted a larger than expected 0.6% in September, albeit partly due to the extra bank holiday, and fell 0.2% over the third quarter. According to the Bank of England’s forecast, this will mark the start of a recession which will last until at least the end of next year. However, much will depend on the timing and extent of the spending cuts and tax rises which the Chancellor announces on Thursday as he scrabbles to plug a ‘black hole’ in public finances of over £50bn.

We cannot end without a word on the turmoil in the Wild West of crypto land following the collapse of FTX, the crypto exchange, but will limit ourselves to the implications for mainstream assets. The main point here is that the impact has been, and looks likely to remain, minimal.

Mainstream assets rallied sharply last week despite bitcoin sliding 25% at one point. Importantly, the danger of crypto losses triggering major forced selling elsewhere now seems much reduced with total assets invested in crypto well below $1 trillion and down from a high of $3 trillion in 2021.