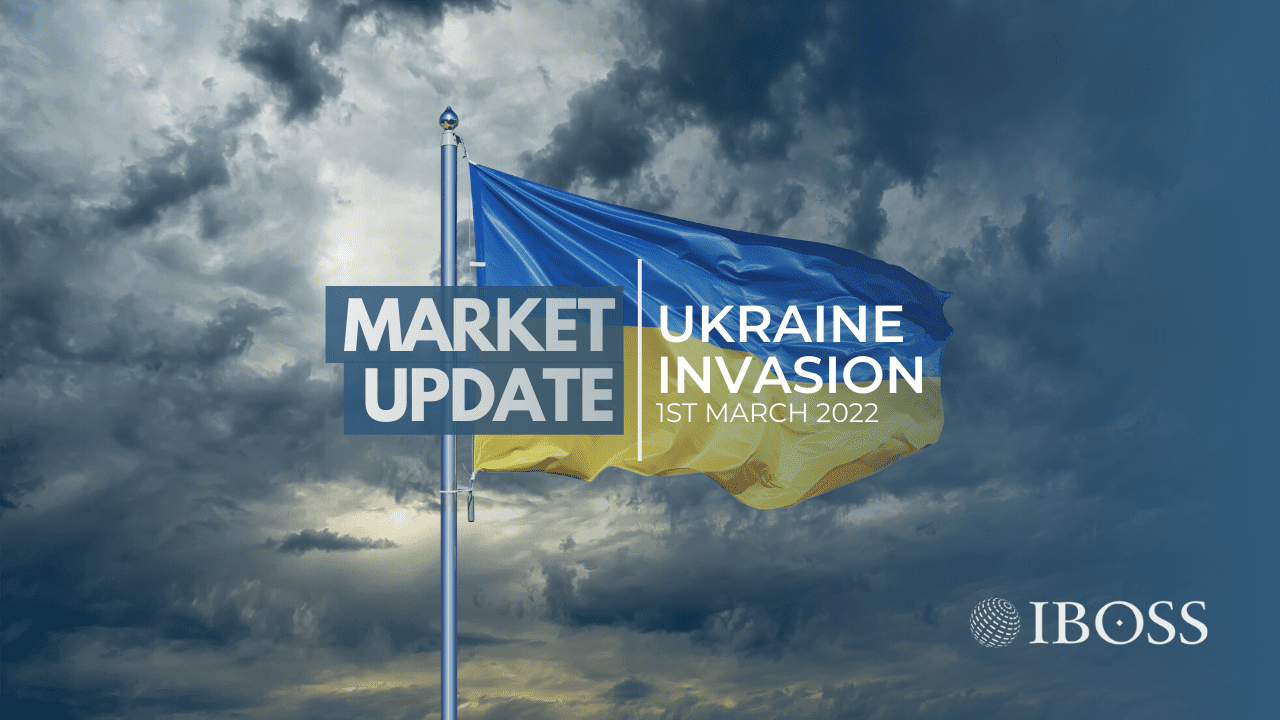 Markets were dominated last week by the Russian invasion of Ukraine, but of course what is of considerably more importance is the human tragedy that Putin’s actions have unleashed. In circumstances such as these, which are unfortunately far from unprecedented, it always feels inhumane to talk about markets and profit whilst people are literally fighting for their lives.

However, it is our job to interpret the unfolding events such as those of the last few days, and we have had an increasing number of advisers asking for our opinion on the impact to markets.

Following initial declines of 3-4%, and perhaps surprisingly given the deteriorating news flow, the major markets rebounded and regained the bulk of their losses. However, following further developments over the weekend, many markets were lower by Monday morning, but Asia had largely bucked this trend.

A similar story of initial investor panic followed by a return of relative calm was played out in other markets. The oil price spiked as high as $105 before retreating slightly below the $100 mark. Similarly, gold briefly rose to $1975 but ended down a little over the week. As for government bonds, yields fell initially, benefiting from the rush to safe havens, but ended the week slightly higher. In the brief periods of recent Ukraine centric optimism, markets quickly turned back to analysing potential interest rate hikes, mainly focusing on the US.

Finally, Russian equities have recovered some of their losses but remain down some 30% over the week. However, Russia accounts for less than 3% of the emerging market equity universe and should have little bearing on the region’s performance going forward.

The quick rebound in equities came despite the Russian attack being considerably more severe than had initially been expected. In part, the rebound may just reflect short covering by investors. But importantly, the sanctions announced by the west were not as hard-hitting as anticipated. Notably, they did not immediately exclude Russia from the SWIFT international payments system and did not target energy supplies. With 30-40% of European oil and gas coming from Russia and Ukraine, this was a major relief. The cold hard truth is that investors are taking comfort from the fact that the crisis looks unlikely to derail the global economic recovery.

What Next for Markets?

As yet, the market fall pales beside the 30-35% Covid sell-off and is also smaller than the 15-20% decline caused in late 2018 by Fed tightening and the China-US trade war. Last week’s bounce certainly does not mean equities could not yet turn south again and hit new lows.

For the previous eighteen months, we predicted oil would exceed $100, that was based on the investment decisions made over the last decade and the failure to consider the realities of the energy transition. A protracted confrontation will further exacerbate the difficulties in the oil supply and demand narrative. This, in turn, could create a surge in inflation and increase the squeeze on real incomes. It would also increase worries of a wage-price spiral and mean central banks would potentially stick to their tightening plans even if equity markets fell further. Indeed, the Fed and the Bank of England would still appear very likely to raise rates by 0.25% at their meetings in mid-March. However, the Ukraine crisis may dissuade them from any plan to increase rates by 0.5%.

All the same, monetary tightening may not prevent equities from seeing gains, especially in areas of the world whose markets had not been propelled to historically high levels as measured by metrics such as the CAPE ratio. Some market turbulence is the norm when central banks start raising rates, but equities usually resume their upward trend within a few months. Even with the increases planned over the coming year, rates should remain low by historical standards, and economic growth can retain its strength.

Similarly, the experience of past military conflicts is that the associated equity market falls have tended to be relatively short-lived. Even in the Gulf War of 1990, when markets fell 15-20%, they had regained all these losses within six months.

Our conclusion, therefore, remains the same as it has been in the last two market drawdowns, which were the Powell pivot in Q4 of 2018 and the Covid drawdown of February/March 2020. In purely market terms, each crisis delivers an opportunity as the reaction to news flow leads to waves of risk asset sell offs, which can often be seen as somewhat irrational in hindsight. We do not believe it is possible to time markets, though it is certainly possible to make decisions that can appear insightful when they were often far more down to luck.

Now more than ever, clients need a balance in their portfolios with broad-based diversification. For example, after the non-Ukraine related market movements of the last two months, we feel that there are both risks and opportunities in the growth and value styles. We had already positioned clients’ portfolios accordingly, and we think these are the kind of areas where we can add value.

As we all hope for a mercifully short conflict and a swift resolution to a war that is already causing so much suffering, our thoughts are, first and foremost, with the people of Ukraine. As ever, markets will move on to the next crisis and we will face the same investing dilemmas all over again, at which point, our response will most likely be the same as well.