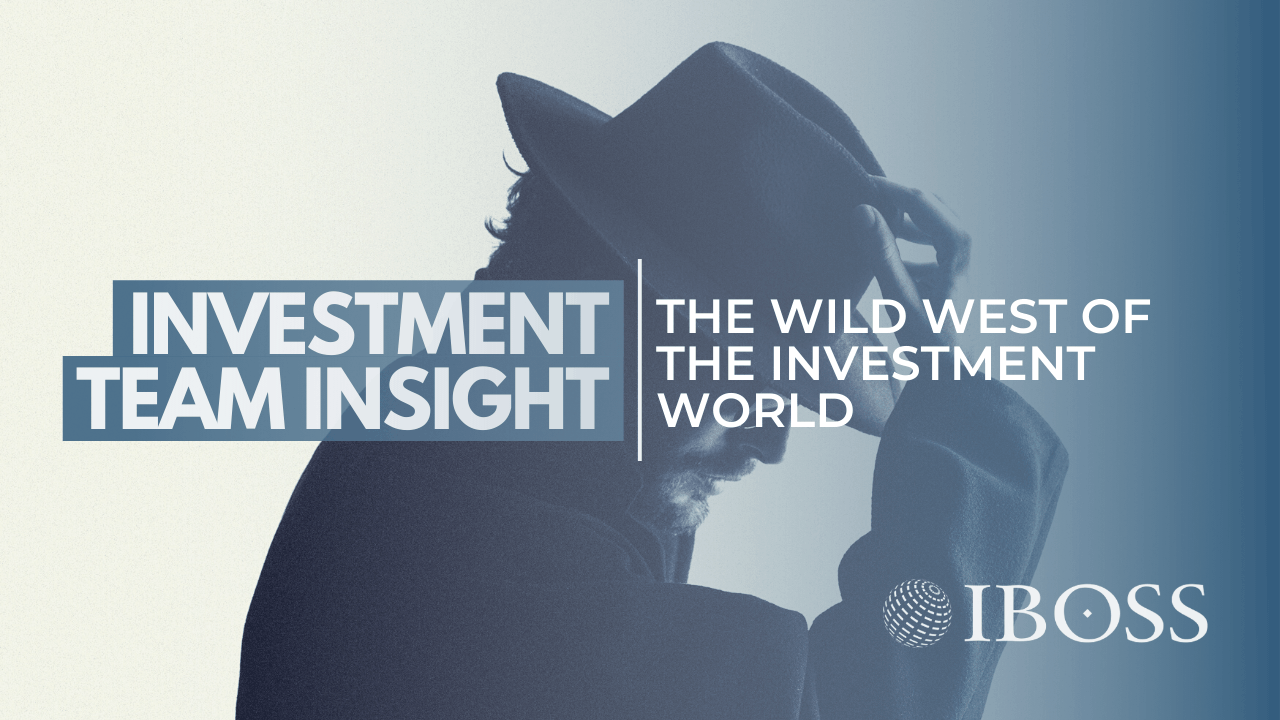 Crypto: A Dichotomy of Experts

As multi-asset managers, we are expected to have an opinion on numerous topics. We are usually happy to oblige, but often lean on experts and other investment managers with more expertise in any given area. One line of questioning that has been consistently coming up for several years now has been our view on digital currencies. Perhaps uniquely, true expertise in the world of digital currencies and blockchain technology is particularly hard to source.

Our team has considerable experience in the more traditional areas of multi-asset investing. This means we understand the risk-return profiles and the correlations of equities, bonds, property, cash and even gold. We know that many clients want to feel like they have at least a basic knowledge of the assets they invest in and the importance of capital preservation. This can, understandably, lead to a reluctance to invest in areas or products which are inherently more complex, especially if that understanding requires a significant amount of technical knowledge.

On the other hand, there are experts with a wealth of technical knowledge and experience. Programmers and engineers who have grown up around technology, and who are increasingly comfortable with the digitisation of assets, are aware of the potential value these can create.

However, what remains an issue is the lack of crossover experience between these two previously distinct skill sets.

We would contend that one group has a much better understanding of the financial risk, and the other group has a better understanding of the product risk, but just as importantly the wide opportunity set. It is this vast difference in the expertise that goes some way to explaining why cryptocurrencies, and blockchain technology more generally, is so controversial. Therefore, it is also possible to talk to two different experts, where one argues that Bitcoin is a Ponzi scheme and another will claim it is worth an almost infinite amount of fiat currency, especially in this era of unprecedented central bank market manipulation.

The wide range of opinions makes the current iteration of cryptocurrencies extremely difficult to value and is why we would consider them primarily speculative. At the current time, we cannot say with any conviction whether any of the crypto coins are a ‘store of value’ or a true currency, but some of them are being used as a medium of exchange. The extreme price volatility and the abilities of Elon Musk and Ark Capitals’ Cathie Wood, continue to move the price significantly. We feel whilst this gives them comprehensive media coverage, it does little to help the evolution or help them to become legitimate mainstream assets.

We do not currently directly invest in crypto, but we do have some observations. While many of these comments outline potential risk areas, something we focus on across all our investments, we believe that digital currencies and blockchain technology will undoubtedly be transformative across many industries. Finding the winners in these evolutionary and, for many, revolutionary markets will likely be incredibly difficult, and the investment backdrop is analogous to the mid-19th century Californian gold pioneers.

The most frequently referenced form of digital currency is private cryptocurrency. These share the broad characteristics of being privately created and decentralised digital currencies with, at least for now, reduced government oversight and regulation. The relative recency of the technology and perceived riches to be made has caught experts and amateurs interests.

Finding a Needle in a Haystack

Those clued up on their financial history may recognise certain parallels here with the dot-com bubble. Though the number of IPOs in the late 90’s (856 across 1999 & 2000) pales compared to the 4000+ crypto tokens currently available to potential investors, the challenge is similar. Namely, which will be the winners and will those winners trade at a higher valuation than they currently are?

After all, if you had bought Amazon shares at their peak in 2000, you would have had to wait seven years to break even following a 90% fall in the share price over two years. Since then, Amazon shares have performed extraordinarily well; however, we doubt that many crypto investors are prepared to have such long-term investment horizons.

The cryptocurrency most favoured by investors is Bitcoin. However, its popularity seems down to first-mover advantage, a phrase that has historically proven to be something of a misnomer. As Doctor Pippa Malmgren recently pointed out on the podcast “Macrovoices”, first-mover advantage can work wonders for brand awareness, but rarely results in outright company success. The example used was vacuum cleaners, known locally as hoovers after The Hoover Company.

In an industry where innovation is moving at a startling pace, there is the opportunity to make a lot of money but finding the winners may prove extraordinarily difficult. Moreover, if you select poorly or the gamble doesn’t pay off, there is genuine potential for permanent capital loss.

A considerable amount of capital has flowed into the private crypto space as investors have looked to make their fortunes in what could be considered the wild west of the investment world. Sadly, this does mean that the crypto space has its fair share of outlaws, some of these outlaws shoot from the hip whilst others partake in much more sophisticated heists.

The sentiment-based value of many private cryptos is easily influenced by well… influencers. It is not difficult to find examples of celebrities, self-professed finance luminaries or social media gurus exploiting their followers to either bid up the price of an existing crypto or push a new one. Elon Musk is perhaps the most well-known example, the comments of whom have measurably affected the price of Bitcoin and ushered in the arrival of the meme crypto of choice – Dogecoin. Those familiar with the greater fool theory might spot the greater of the fools in the relationship between the influencer and influenced.

More sophisticated examples of suspect investments are, as you would expect, difficult to spot and even more challenging to adequately understand. However, examples that may interest those looking to do further research include the Poly Network hack and the fiat backing behind various stable coins and platforms. One fascinating area that perhaps fits within the scope of this blog is the use of NFTs for potential money laundering purposes.

A point we would make directly is that the multitude of examples relating to crypto ‘hacking’ is more usually a type of fraud. As far as we know, a blockchain has never been hacked (a potential benefit of the technology); however, wallets, passwords, and platforms have been accessed and stolen through fraudulent means, generally through human error.

In any case, the evolution of criminal or close to criminal activities related to the crypto world seems to be developing even faster than the assets themselves. As such, regulatory bodies have begun to increase their scrutiny of crypto assets, which is just what we see from the outside. We expect there is also considerable work being done behind the scenes by government and banking agencies. However, whilst many crypto enthusiasts’ publicly welcome regulatory oversight, it has rarely been the case that increased uncertainty has benefitted asset prices of any kind, particularly if any large-scale frauds are discovered along the way. We have not covered it in this blog, but this excludes the potential regulation pertaining to the environmental impact of crypto mining.

For those interested in the FCAs current stance on crypto investing, I have included an extract and link below – published in June of this year.

Another threat to the current crypto status quo is the potential for Central Bank Digital Currencies (CBDCs). These are digital tokens issued and minted by governments to provide a medium of exchange in place of physical cash – in essence, a virtual form of centralised fiat currency.

There are many reasons governments would look to adopt CBDCs. Not least of all, a digital currency allows monetary and fiscal intervention to be enacted with a push of a button. However, unlike privately produced cryptos, the enactment and introduction of a CBDC reduce the users’ privacy as the government can collect data on purchases of all kinds – including other cryptocurrencies. This privacy conflict is likely to be a sticking point between private crypto and CBDCs. In addition, governments with CBDCs would have the ability to obstruct access to cryptocurrencies that don’t comply with regulations.

Central banks the world over have expressed interest in creating their own digital currencies. ECB President, Christine Lagarde, has been just the latest central banker to say that there is public demand for CBDCs. We don’t see much evidence of public demand for CBDCs other than from central bankers afraid of losing their control of fiat currencies. In fact, most investors investing in crypto want precisely the opposite of more central bank control and will be opposed to the outcome proponents of CBDCs.

Though they may move at a glacial pace relative to other crypto suppliers, their impact in the broader market is likely to be sizable and, at the very least, should not be ignored. In the wrong hands, CBDC will have the power to reduce civil liberties to a greater degree than any previous government tool. Maybe this is actually the most significant risk of all, but you won’t hear much about it from central bankers or politicians, and the risks will undoubtedly be underplayed.

The world of digital currencies is a particularly contentious one. The above blog aims to highlight some potential areas of risk, mainly from a financial perspective. It is by no means a recommendation for or against the personal ownership of such assets or the validity of the underlying technology.

For those interested in further discussion on the topic, we would highly recommend the MacroVoices podcast: https://www.podbean.com/ew/pb-tv29x-10b8c7e