The drivers behind the performance of both bonds and equities changed at the end of November 2021, and it all hinged on the inflation outlook. In a few short weeks, the Fed went from ‘inflation is transitory and not really a problem’ to ‘ah, actually it is a problem; in fact, it’s our number one concern.’

The situation was less clear regarding our own bank of England, but that wasn’t data-driven. The data was clear enough to many commentators and investors alike. Still, their commentary and communication was so confusing that we thought maybe they were not telling us something. It turns out they weren’t hiding anything; it was just simply poor messaging. When messaging is that poor, it would probably be better if they didn’t bother.

Finally, last week we had the ECB’s Christine Lagarde acknowledged that pretty much everything she said about inflation and potential interest rate rises at the December meeting was incorrect. It appears that they now also think that inflation is of more significant concern, and interest rates will have to rise sooner than never, which is approximately what was factored in before.

If we summarise these central banks strategies, it seems it was all based on hope. Hope that inflation would just magically disappear in a few short months. Once again, we learn that hope is not a very good strategy and that just saying something a lot doesn’t make it any more likely to transpire.

Is it Time to See the Pandemic in the Rear-view Mirror?

Economically, we think that for many countries this is indeed the case. With the obvious caveat that all bets are off if we encounter a new variant that once again increases ICU cases and deaths, for the UK, much of Scandinavia and an increasing number of other countries, life is returning to a version of how we lived pre-pandemic.

The US, which is still the largest economy, has suffered more Covid deaths per capita than almost any other country. Still, as with their shocking gun crime statistics, a significant percentage of their population seems to be just accepting that’s how things are. In economic terms, that means a reasonable degree of business as usual.

China, the second largest global economy, is the exception to a return to normal via either better statistics or just an acceptance of them. Here they are maintaining their zero-tolerance policy. Due to the transmissibility of the Omicron variant and given the low number of hospitalisations, this policy seems to make less sense than at any other time since the first outbreak originated back in China at the end of 2019.

Although this policy will undoubtedly be frustrating for many of the Chinese population who are aware of the data, the main impact for the rest of the world remains the risks to supply chains. Over time, many countries will ensure they are less reliant on foreign powers for essential parts of their own supply chains, however, most are not at that stage yet. So, if China continues to lock down in pursuit of the zero-tolerance strategy, we can expect more disruption, more cost pressures, and therefore more inflation.

The irony is not lost on many central bank observers that the inflation the governors craved for so many years, and which they thought had gone for good, is back with a vengeance, and now it’s what keeps them awake at night. To be fair, it should keep them awake as they have got themselves behind the curve, but their response is already to look for scapegoats.

Take One For The Team?

Adding insult to injury, the BoE governor, Andrew Bailey, asked Britons not to demand higher wages as this would fuel higher inflation. This is from a man whose salary is £575,000, which is 18-times greater than the salary of an average full-time employee. We can only suppose that this kind of crassly insensitive comment will make people even more likely to demand higher wages, not less so. It reminds us of David Cameron’s speech which contained the phrase “we are all in this together” the effect was the opposite of the one intended. Wage rise increases are already here, and as inflation bites, at the same time as unemployment is at an historic low, there are likely to be ever higher employee demands. These new demands are not restricted to pay, and employers will also have to accept a greater degree of flexible working if they want to retain and attract the best talent in their respective industries.

Getting Paid to Save?

The result of our newly found inflation is increasing interest rates for savers. In Germany, this might even mean they no longer have a minus rate of interest on bank account savings, and if things go truly crazy, who knows, they might even earn interest on their deposits!

What we do know is that higher rates are good for bank profits. Since most of the worlds banks have had to live with low rates for years, this makes the outlook for the sector look better than at any time since the global financial crisis. In particular, the UK, which has a significant amount of banks and other financials within the FTSE 100, looks to be well placed to capitalise on the new world of higher rates.

However, the problem savers still have with inflation soaring is that the real savings rate (net of inflation) is generally getting worse, not better. This could continue to pressure investors to invest in assets other than cash, where there is the possibility of beating inflation.

The Ever Moving Goalposts

One of the benefits of having a close relationship with advisers is that we quickly get to know their client concerns. There have been two noticeable changes so far in 2022.

Firstly, some clients are asking about performance, but unlike last year when it was about comparisons with American markets and particular technology stocks, it is now comparisons with the FTSE100. (Click here to view a document we have created to help address this popular question, which includes Core MPS comparisons)

For the previous few years, investors have been rewarded for holding an increasing amount of American tech stocks and digital assets. These momentum fuelled assets got progressively more speculative, particularly over the last three years. Investors moved from purely FAANG, which made extremely healthy profits, to smaller low/no earning technologies and crypto with a rationale not dissimilar to 1999. The considerable losses in many of these assets have had clients re-evaluating what success looks like.

The second new concern is: will their investments beat inflation?

This is tricky to answer because it will depend on the timeline and the government and not very independent central bank reaction functions to the inflation data. The outcome will vary from country to country, and politics and the election cycles are likely to play an important part.
Another essential element will be energy prices and, in particular, the oil price. Due to some naive energy policies enacted over the last decade, governments have made another rod for their own backs. There is no quick fix to the energy crisis, but at least many leaders are having more realistic conversations about the possible options. As with inflation, just hoping a situation will rectify itself is, in the end, untenable and the longer the delay before facing the facts, then the more drastic the eventual response has to be.

Performance in the New World

Only one major stock market has made significant gains in 2022, which is the UK’s. It is well understood that the major stockmarkets constituents in the UK are big oil, banks and pharma. Therefore it would be little surprise to see the current market trend continue given the macro backdrop and expected global monetary policy.

There are two other noticeable changes in 2022 from 2021. Firstly the US is the laggard, which hasn’t been the case since Q4 2018. We have drawn parallels with risks the US market, in particular, faces compared with those of 2018 and the infamous Powell Pivot.

Secondly, since the turn of the year, and without significant new regulatory rules from the Chinese government, their equity market has been performing much better than at any point in 2021. As with the UK’s resurgence, this could well continue, especially as the Chinese government is easing monetary policy, which is in stark contrast to most of the world. If there is one thing we know about equity markets, it’s that they like easing monetary policy above pretty much all other factors. 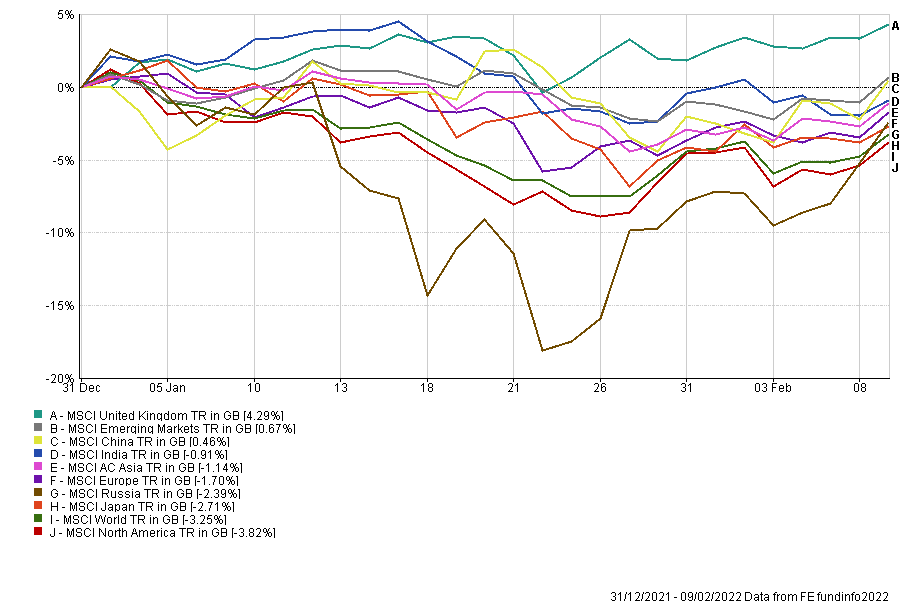 *Information displayed is short term in nature to demonstrate performance over a specific time period. Please contact IBOSS for long term data, including since launch and/or 5 years.

This communication is designed for professional financial advisers only and is not approved for direct marketing with individual clients. These investments are not suitable for everyone, and you should obtain expert advice from a professional financial adviser. Please note that the content is based on the author’s opinion at the time of writing/publish date. Our views and opinions regarding certain investment themes and topics can alter over time as the macroeconomic background changes and other industry news is made publicly available, this is not intended as investment advice.