The noise surrounding the Chinese government’s crackdown, which started with technology firms and then quickly bled into other sectors, reached something of a crescendo on 20th August. Every interviewer, when discussing Asia, would begin with the question, “is China uninvestable?”

This would often be followed by prevaricating answers, which often seemed to confuse multiple issues from extending further crackdowns to human rights. We will avoid similar prevarication and say China is very investable, whether the crackdowns stop tomorrow or next year, or the year after, but on human rights issues, we can make no comment whatsoever.

China remains so investable because it is fast becoming the biggest economy on earth. It needs its tech firms and most of its derivatives to have any chance of accomplishing its goals in health, education, and property. Since 20th August, the IA China/Greater China index is up over 5% compared to 1% for the IA North America index. This is an extremely short period and may turn out to be indicative of nothing more than a dead cat bounce rather than a dip-buying opportunity.

However, we would contend that as the Chinese government can act without hindrance on both fiscal and monetary policy, as well as controlling news flow on compliance issues, they hold far more cards than their US peers. What’s more, the relative valuations are more attractive now than they have been for over ten years (fig 1). 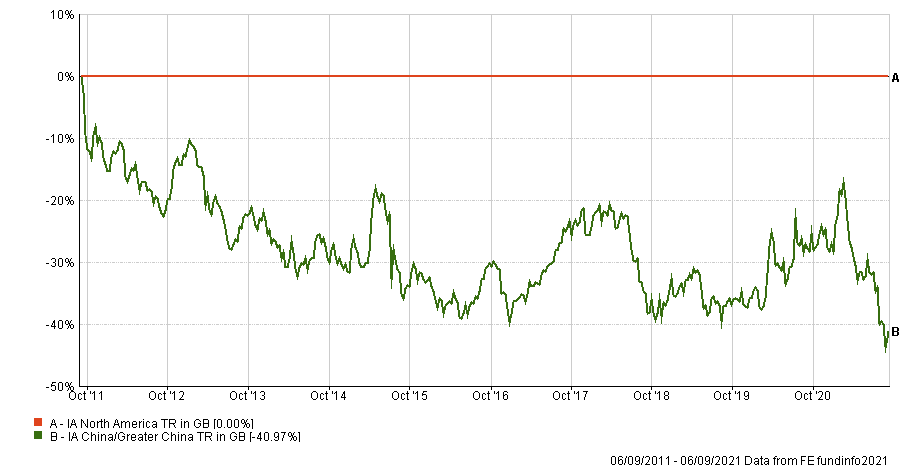 Since IBOSS’ inception, back in 2008, we have probably written less about Japan than any other developed market. In fact, until May last year, we didn’t actually explicitly invest in Japan and relied on the small group of funds within the IA Asia inc Japan instead. The primary reason for our reticence was the unconventional and, more importantly, untested monetary policy. Obviously, since then, most central banks have adopted similar practices and we brought Japan back in from the investing cold.

Our current choices in the Japan equity space are JPM Japan (Hedged) which is actively managed, and the iShares Japan Equity Index fund, which is unhedged and gives us cost-effective broad market coverage. For much of the last fifteen months, Japanese equities had underperformed the other developed markets, however, all changed from precisely the same time as the China turnaround on the 20th August, but for very different reasons.

After a lacklustre start to their vaccine programme, Japan have now caught up with many other developed nations in the last few weeks and are expected to overtake the US by the middle of September. Secondly, their case numbers have been falling, meaning the economy may be left to grow less encumbered than many peers. Thirdly, many asset allocators have been structurally underweight Japan for many years, and some appear to be rushing to close that underweight.

Finally, the most recent and seemingly significant catalyst is the current prime minister Yoshihide Suga will stand down in September. Although his successor might be far from clear, he is expected to add more fiscal stimulus than Suga did, which is all the market needs to know for now. At the time of writing (07/09/2021), the IA Japan sector since 20th August is up 7.4%, compared with the IA Global sector, which is up 2.2% over the same period.

Back in the first quarter of this year, there was much talk of American exceptionalism. They were leaders in the vaccination rate, the economy was rapidly reopening, and the job numbers and growth trajectories both looked, well, exceptional.

They still have many of the strongest tech companies in the world and a dynamic economy, but recent data on both the jobs front and sentiment surveys were rather disappointing. Coupled with this, is a stalling vaccination programme and fiscal stimulus money mired in the weeds of the US political system. With so much good news already priced into US assets and a Fed appearing to want to start tapering before the year-end, the US market outlook looks less certain than at any time since the start of the pandemic.

Central banks will be reluctant to withdraw any liquidity or reduce stimulus if equity markets tank, and that is reason enough to be bullish on US stocks. On a relative basis however, the US exhibits its exceptionalism mainly in its high valuations compared to other developed markets, such as Japan and the UK, and indeed to many emerging markets such as China.