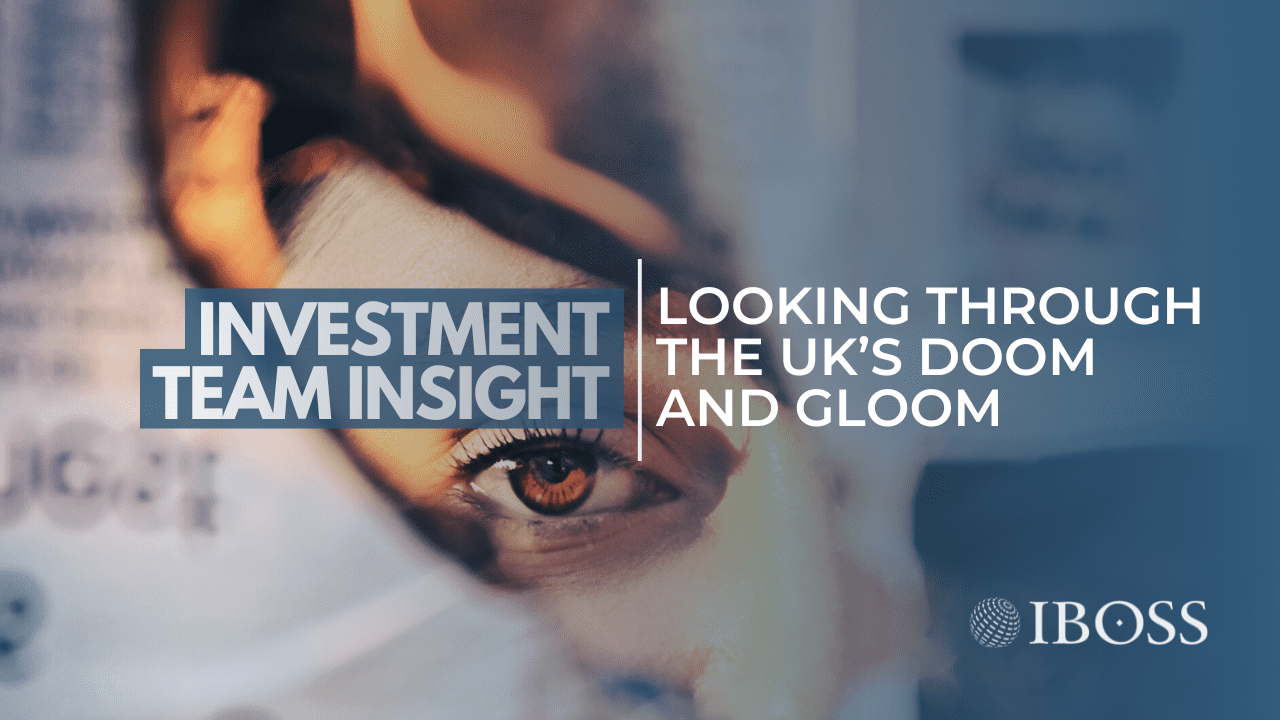 Headlines over the past weeks and months have been filled with nothing but doom and gloom. After listening to a media commentator this morning (30/08/2022) effortlessly move from talking about a small decline in house prices to referring to it as a ‘housing crisis’, is there any wonder the UK public have become so dispirited?

This follows inflation and interest rate rises, a cost-of-living crisis and deteriorating UK economic outlook, and now investors can add political uncertainty into the mix. The result of the contest, to be announced on Monday 5 September, will decide whether Foreign Secretary Liz Truss or former Chancellor of the Exchequer, Rishi Sunak, will become the UK’s next Prime Minister.

We will share our views on the PM change a little later. Firstly, the most recent wave of negative headlines that greeted the Bank of England’s decision to raise interest rates by 50 basis points – the highest single rise since 1997 – needs to serve as a timely reminder that a country’s economy and its stock market are not the same thing.

With rates rising, predictions of inflation peaking at 13% and the economy expected to enter recession in the fourth quarter, sentiment towards the UK is fairly low and it could be argued that it has been for many people since the Brexit referendum.

However, investors do not invest in the economy, we invest in the stock market, and within the FTSE 100, the prospects for big oil, miners and bank companies are the strongest for as long as I can remember.

Outside of the FTSE 100, the sudden change worked against active managers, as any diversification in company size detracted to total fund returns, with the FTSE 100 up 9.55% and mid and small-cap stocks down 16% and 24% respectively, since September 2021.

However, despite the recent comments from Andrew Bailey, we believe companies in both the FTSE 250 and AIM indices are also sitting on attractive valuations. This is because they are still run by the same entrepreneurial people as they were before, and whilst we believe the UK’s largest companies will continue to benefit from a weaker pound, we caution investors against writing off its SMID contingent, which has become cheaper and has more potential to innovate.

It’s no secret that the UK has a heavy weighting towards oil and gas companies. Industries that have had the preverbal foot on their throat from the ESG and anti-fossil fuel movements. This agenda has been supported by great swathes of elected politicians eager to please voters in the here and now, but potentially with too little regard for the energy realities facing those same voters.

Recently, we have been asked on several occasions if the UK is too dependent on its commodity holdings?

Firstly, we have been increasingly positive about the UK for several years and the funds we use do have some exposure to the commodities space, however, their most significant overweight is financials. Secondly, having said that, we still believe that there is considerable value in the commodity complex, much of which has suffered from ill-conceived underinvestment over many years.

Due to this under-investment in energy needed to see us through the long transitional phase to renewables, we now see unprecedented opportunities for the likes of BP and Shell. This is following a low point in February 2020, when at that time, energy prices, and commodities more broadly, were collapsing due to demand falling off a cliff. These companies are now seen by an increasing number of investors as part of the solution and not the problem personified.

At the same time in February 2020, interest rates looked as though they would be at, or, near zero for as far into the future as we could see, so financials which had been suffering for years were under even more pressure. On top of that, UK plc has had an image problem ever since the Brexit vote and it was hard to imagine a worse-case scenario for the UK.

As a result, valuations fell considerably as banks had no interest rates to play with and generate profits from. However, the outlook is now much improved, whereby the expectation is for more rate rises, providing the potential for greater margins going forward and we believe the inflationary backdrop provides a strong platform for the sector as a whole.

The hot seat at number ten

So, with more UK uncertainty stemming from who takes over the seat of Prime Minister next week. It is our view that, unlike when Jeremy Corbyn was the leader of the opposition, this particular handover, and even if there is a change of party in charge, does not have the same potential for disruption.

The biggest impact for UK investors, whether it is from a change in Prime Minister or Brexit, is through the currency. Whilst the weaker pound gets a lot of coverage, it is important to understand why and against what.

For UK investors the weakening pound has often cushioned equity market losses and the current period is a good example of this. One final point which needs to be remembered is that the FTSE 100 is one of the most truly global indices, and not all companies want the currency to move in the same direction.

In short, we feel this change of PM will have little overall impact, at least that is observable. So, despite all the gloom, it’s about looking through the headlines and staying focused on the fundamentals, at least from an investment standpoint.

It is our belief that the UK, and the large-cap dividend-paying stocks in particular, offer good value. It needs to be remembered that in general terms, the UK has been an underperformer for many years, but on a relative basis the UK should do well in a globally inflationary environment.